Many years ago, a dragon lived on Hanö, the island we are currently located. The story tell that the dragon every day flew between this island and another one placed about 20 kilometers away, just about where we started this morning. This was a short distance for the dragon and it only had to swing his enormous wings twice in order to make the trip. Then one day the humans had build a lighthouse and the dragon was blended by the strong light and crashed into the hard rock on the east side of the island. Today the same lighthouse has the strongest light of all lighthouse in the Baltic sea and is raging 74 meters above sea-level.

Our voyage from Hasselö to Karlshamn was a great one. We enjoyed setting off in the morning with a perfect breeze and almost no waves to rock us around. This presented a great opportunity to get some scrubbing done in the cockpit. The old teak is going to take a while to get in perfect shape, but we have started the process and is so far very happy with the result. With time it shall look good as new and the value of the whole boat will have changed drastically. The cockpit is now pretty much scrubbed clean of all algae and moss and is ready to be sanded down before we coat it with a couple of nice coats with oil. 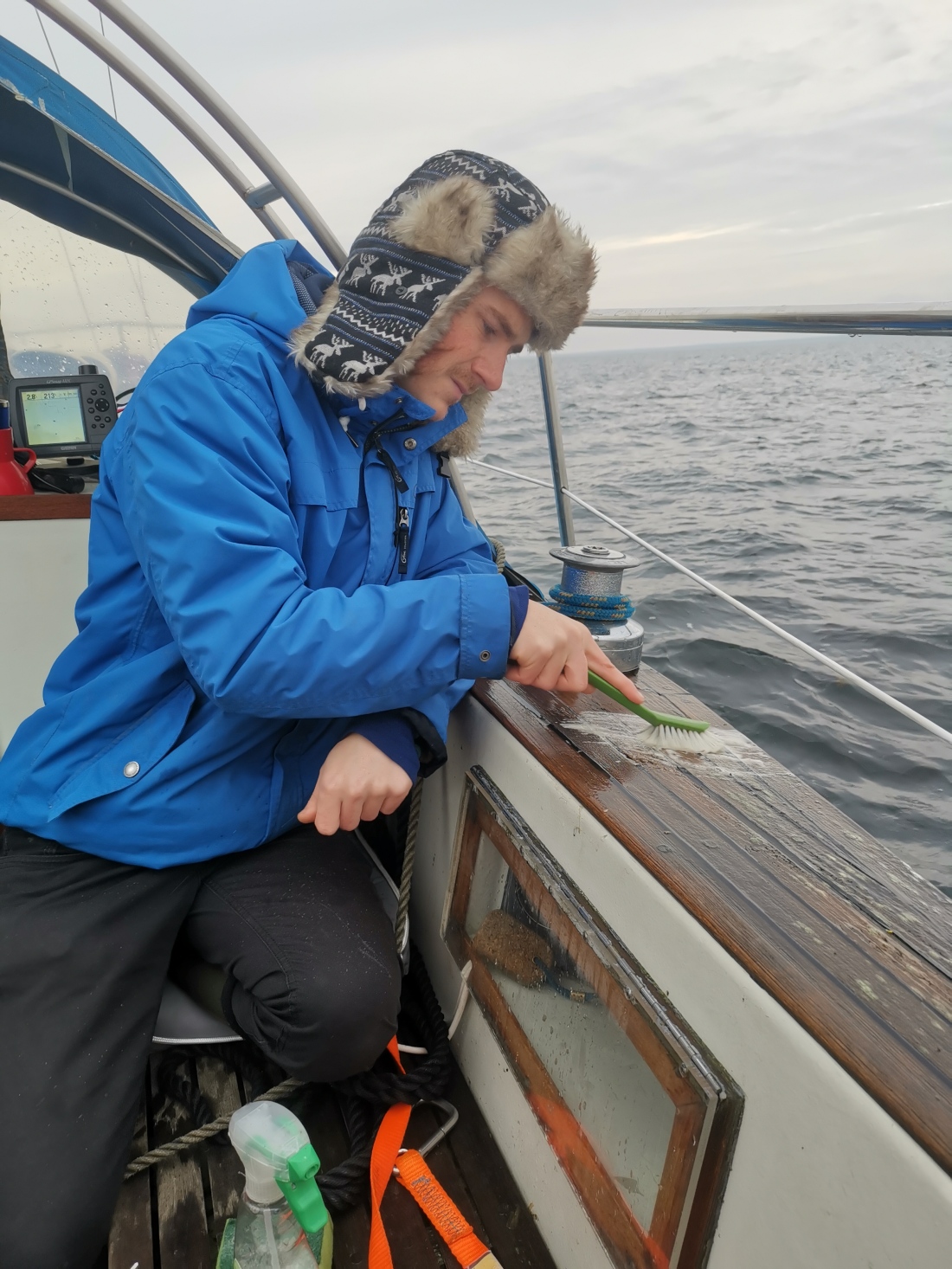 It was pitch dark as we made our way the last hour into the harbour of Karlshamn, but we arrived just in time to search out a large supermarket for us to do some necessary shopping to restock. You’ll be amazed of how many potatoes a hungry sailor can eat after a long day at sea. We’ve had no luck with fishing and I’ll be the first to admit that this is mostly due to our lack of trying. But to fish in the Baltic has been no fun at all. The fish won’t bite, at least not where ever we are passing through. This is something we’ll have to pick up, but there is always so much else to do and take care of that when the evenings come we are either too tired, cold or in the middle of a marina where it’s strictly speaking not allowed to fish. Our diet have therefore been a bit differently than we had originally planned. For now we are sticking to pasta and stew.

Karlshamn was not my favorite town. It’s fairly small and the whole city area is brick-laid, grey, pretty square and a bit dull. I suppose there is nothing wrong with the place, but it didn’t offer me any good vibes. My favorite part was the one street that had four or five second hand stores next to each other. My view on the city may be colored by the fact that the guest harbour sucked. The showers were dirty and the heat was turned off, it was expensive and the only other amenity offered was a free washing-machine with a broken handle and a dryer that spewed dust all around the room when you turned it on. On top of this the boat was rocking constantly because they had placed the births at the run-out from the river so the stream constantly got hold of our keel. Oh, did I forget to mention that the harbor’s closest neighbor was the main gate of a huge factory that smelled bad and had trucks coming and leaving without breaks? I guess we can’t like all the places we visit of course and hopefully other travelers have a better experience than us. 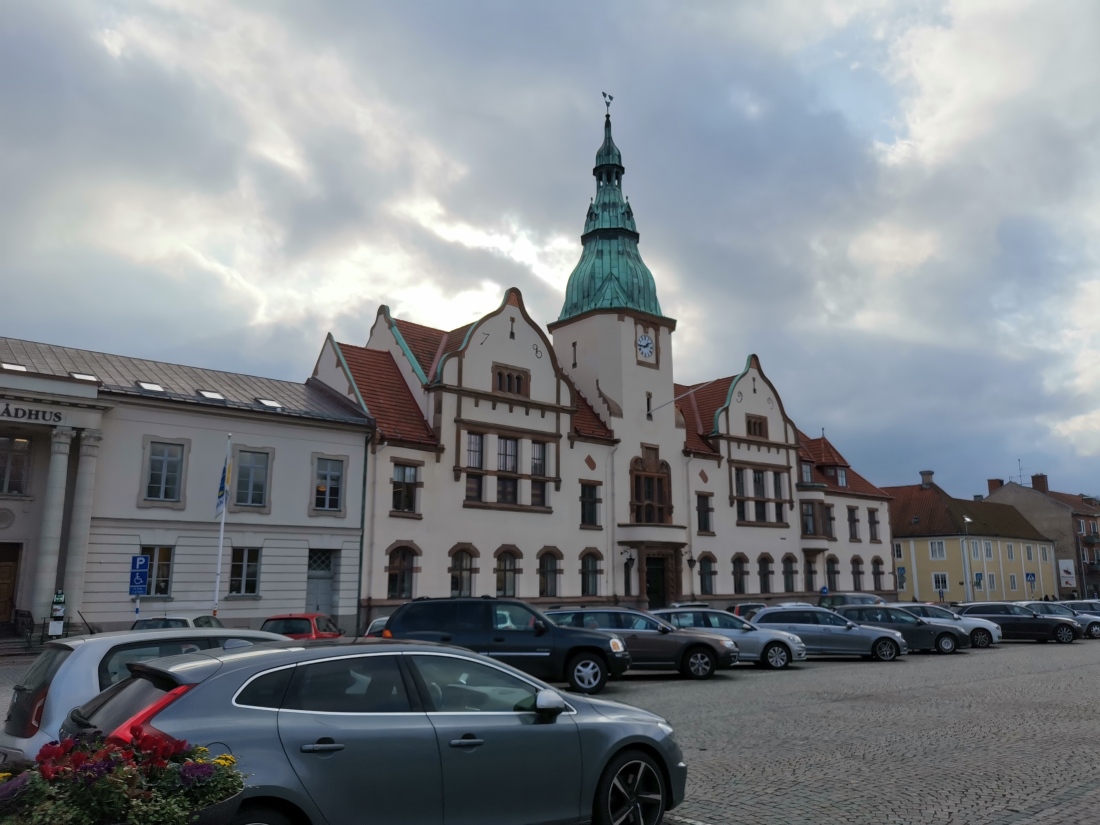 Despite all of this we decided to stay an extra night to make sure we had some good wind the next few days. It has become a huge part of our week to plan ahead according to the weather. If we stayed an extra night in Karlshamn this would in theory give us the best winds for the coming four days so it was an easy choice in order for us to save on diesel and get the most out of our sails.

Today has been much better. I got up early in order to catch the morning breeze out of town. The plan was simply to re position ourselves by sailing to Hanö and be ready for tomorrows wind to take us all across the Hanö Bay. It was a fairly short sail of only 10 nautical miles and it took about two and a half hour.

The island is beautiful. Surrounding the harbour is the little village where now only 8 people have their permanent addresses, according to the internet. The village is fenced in to keep out the hundreds of deer living here. We went for a pretty good walk and could enjoy both forests and open landscape. The lighthouse was a treat and so were the many colors of the leafs preparing for winter.

Back in the boat I had to sew the foresail again, the poor old sail is living a hard life in retirement but it still have lots of life left in it. Later we both could settle in for a relaxing evening of Swedish meatballs and finally a boat that enjoy not being tossed around by a river twenty-four seven. Tonight we’ll sleep great, cause that’s what potatoes and gravy does to a man. I’m sure the dragon would agree.

View all posts by Captain Jack

Posts of the past